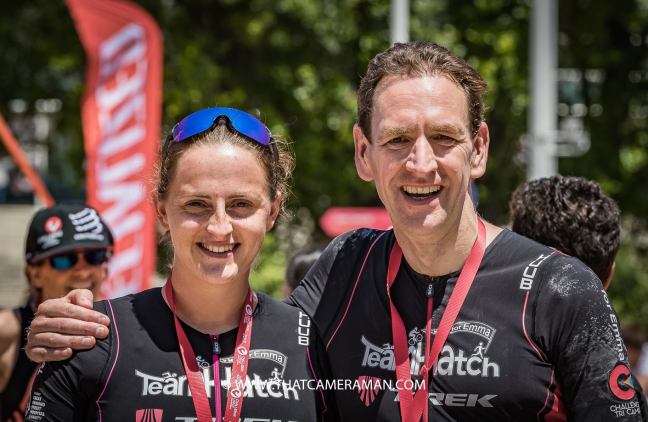 It has taken a while for me to write this one. It’s only just sunk in. It’s easy to get bogged down in the details. My run wasn’t that great. I got stuck on my own on the swim. Did I push hard enough on the bike, or too hard, is that why I slowed on the run?

Are you not over the moon? How does it feel? Questions asked by friends and colleagues at work. In truth immediately after the race I was more concerned with cheering Team Hatch (a testament to the team spirit if anything) and taking my shoes off (my feet hurt!). And in the days after the race I was in a daze of tiredness with lack of sleep for 3 days and travelling.

It was only when I looked back on last year. 2nd at Phoenix Sprint. 2nd at Hercules Standard. 2nd at Vichy 70.3. Even 2016 was a whole host of 2nd places! So it really is great to take that top step at the first race of the year. So that was Challenge Lisbon, here’s how it all went down.

I arrived first out of my new Team (Hatch) catching an ungodly early flight from heathrow to arrive in Lisbon in time for breakfast (basically). I successfully navigated the metro system with bike box and even secured a free ticket thanks to some friendly Americans. They probably felt sorry for me with my huge amount of luggage!
I had a while to kill before I could get into my room and build my bike so I hit the nearby shopping centre (which would become a godsent all weekend) for some retail therapy.
After lunch and the worst organisation of a fire drill ever (Portuguese rules) I could get into my room ready for a nap….or so I thought! But everyone started arriving so it got far too exciting! Bike was built quickly before heading down to register and collect our numbers. It was good to catch up with Rachel who I haven’t seen since Mallorca. Early nights for all after a long day of training. 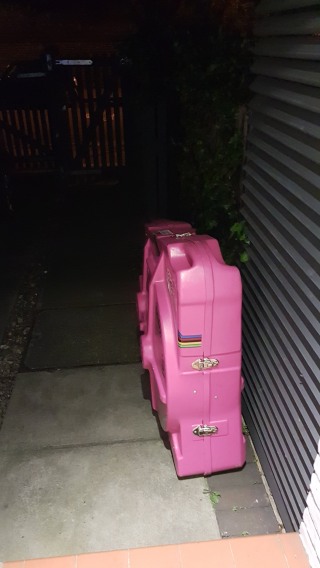 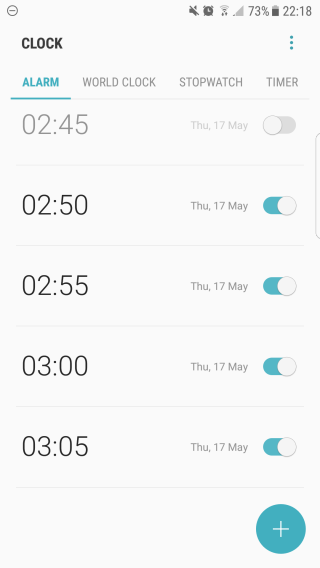 Did anyone actually see James Hatchling sit down during breakfast? Finally the whole team were together, and there were t-shirts/trisuits/helmets and other miscellaneous items to hand out. James really couldn’t hide his excitement, successfully polishing off coffee, yoghurt and the customary cream cheese bagel all whilst standing up and talking to any of the Team as they walked in. Scratch that, I’m pretty sure he recruited a couple more Team Hatch cheerleaders there and then.

Team assembled. A mix of nerves but mainly excitement. Meanwhile outside Mr Team Hatch had somehow convinced 3 mechanics from the local Trek store to come and help build any bikes/check our personal bike builds. Now this is something I DO NOT have the luxury of when travelling solo. And it really took the stress out of preparations. Looks like the mechanics enjoyed themselves too.

We headed to the swim familiarisation and PHOTOSHOOT. There is a theme developing here, yes we were followed around all weekend by Darren of ‘That Camera Man’ and Oli from Huub. It did feel a bit like we were some kind of pro cycling team, but also served well to remind us why we were racing as part of Team Hatch.
The water was lovely, not too cold. Salty. The course is pretty twisty but very smooth owing to the enclosed conditions.

Lunch at the shopping centre again, I wish the UK had this many good food options and outdoor seating in the humble shopping centre. And of course an essential pre race pasta de nata!

The day before a race is never quiet. Bike racking was up next, the question of to deflate or keep your tyres as they are is always a great debate. Fortunately knowing we had at least one track pump between us, it was a safe bet to deflate (and avoid any unexpected blowouts overnight) and reinflate on race morning. Trying to work out the route through transition and which bag to put where is always confusing….all would become clear at the race briefing that evening….or so we thought.

I’ll brush over the race briefing. Personally it was fine, but people do get overly anxious about everything! Control the controllables. Team dinner at a local italian before heading to the hotel to maximise on sleep before the 5am alarm. We were very lucky to be hosted by the superb Kat from Challenge TriCamp (I’m not biased at all) and hence staying at Tivoli Oriente the official race hotel a mere 5 minutes wall from the start.

I had the best nights sleep I’ve EVER had before a race. I couldn’t believe it! It didn’t really make me feel any less nervous, but it was all normal. Wiggle into the FAB Team Hatch Huub trisuit, 3 porridge pots (Moma) and a banana later, ready to go.

Nutrition prepared (Precision Hydration, Tribe bars on the bike and Project E2 gels on the run) I took them down to transition to put in the relevant bags/on my bike. Note: In a middle distance triathlon you are not allowed anything on the floor, everything must be stored on your bike or in a transition bag. There is a T1 bag for any bike bits and to put your wetsuit in and then a T2 bag for your trainers and any extra nutrition.

None of my wetsuit wiggle pictures made it into the final cut (thanks Darren!) but that’s what happened next. I elected to do a land warm up before watching the pros set off. Shortly after we were ushered into the water and a fought my way to the front row. I did not want to risk a kick to the face!

Swim – As expected at the start, a little bit of a fight with 250 people per wave. But after the first buoy I got a bit of clear water and a bit of a draft. By the 4th buoy (there were a lot) I was stuck behind two swimmers who seemed to be slowing and I could see a gap developing in front of them. No! I struggled to get round them and by the time I did there was no hope of catching those in front. The following 900m Is wam solo. not quite the plan!
Aching arms I was pleased to see the ramp after such a twisty course. 28:49, I wanted closer to 28 but considering the ‘solo’ effort and still a PB in my second ever middle distance. Struggled with my new wetsuit velcro, but I inadvertently initiated the ‘quick-release’ (who knew! Fancy.) so I was soon pulling it off my shoulders and into T1. Bum to floor (Ben T!!) with my bike shoes, wetsuit off shoes and socks on. And a helpful volunteer stuffed my wetsuit in the bag ready to throw over. Jog to bike, sunglasses + helmet on. Smooth.

Bike – Coming out of T1 Steve told me I was 30 seconds down on someone in my age category. I had some very specific goals on the bike. Keep even pace for the 4 laps and try and get as close to sub 2hrs30 as possible. And remember to drink every 10 minutes and eat every 20-30. What I didn’t expect was the headwind all the way out nor the steepness of the hill at the turn point. It was certainly steeper than I envisaged, but it was short and I was soon hitting 60kph on the downhill 🙂
I caught the first girl early on in the first lap and another at the end of this lap. I consciously dug in for the next 10 minutes to create a gap. I wanted as much space as possible when it came to the run.
I was happy to get my feet out of my cycling shoes (I haven’t quite found any triathlon shoes I like) and manage a ‘sock run’ through transition enabling another quick transition to get out on the run course.

Run – Trainers, visor on. In contrast to Vichy 70.3 where I smiled for a good 15 km running way over goal pace, Lisbon was a rollercoaster of emotions. I knew I was first out on the run course in my age group owing to no other bikes being racked prior to mine. But I was running scared. I know I am not the fastest and it is still a bit unpredictable how I will run of the bike. I really wanted to average something faster than Vichy but sadly it was not my day. I gradually got slower finding the slightest of inclines unforgiving. I kept telling myself to relax into it.

However the 4 laps allowed me to see how the pros were getting on as well as the rest of Team Hatch! And although I didn’t manage many cheers I was thinking them inside my head, promise. And the support from Team Hatch friends and family was EPIC.
I could also see if 2nd and 3rd places were gaining on me. I never did spot 2nd but I could see Alice was also having trouble on the run the gap stayed the same and then got bigger by the end. That finish line couldn’t come soon enough, good job it was just 19km then!

It was only later, on a message from Laura Siddall that I learnt I was also first female age grouper overall! Now that’s a first!
I also had some fairly amusing messages from family and friends wondering where I had got to/if I was injured because I had disappeared off the tracker! Sorry folks I was too busy eating ice cream, drinking beer and collecting a trophy to look at my phone!

The result did not sink in. It was all about Team Hatch on that day. Cheering the rest of the team on and celebrating afterwards was the main concern. So well done to Alistair, James, Rachel, Ben, Ben, Alex, Lizzy, Abi, Imogen, Esther and Tom. You were all EPIC. I have no doubt you will make Challenge Roth look like a walk in the park.

And in case you want to throw a few pennies in our direction. Check out the team fundraising page here.

A big thank you to all our sponsors and supporters: Trek, Huub, Athlete Lab, ThatCameraMan and Challenge TriCamp.

And although I wasn’t jumping for joy at the time, now I am. It’s exciting to know where I can improve and to have a solid result to start off the season. I know I have it in my legs to run better off the bike. Stay strong on the bike. But actually I raced the best on the day. I consciously made a break on the bike. I raced to the conditions.

Just less than 9 weeks until Challenge Prague. Plenty of time for big gains.

Back to it 🏊‍♀️
Peak District 💻📸
No pain no champagne…. Never a truer word on that run last weekend 😳
Time trial Tuesday obviously 💁‍♀️
A race in pictures.
On Tuesdays we wear Teal 🎽

Back to it 🏊‍♀️
Peak District 💻📸
No pain no champagne…. Never a truer word on that run last weekend 😳
Time trial Tuesday obviously 💁‍♀️
A race in pictures.
On Tuesdays we wear Teal 🎽
IOW blooper edition 🤣
A ‘Wight’ good time on IOW 💛🖤
Land of Smiles is calling 🤙